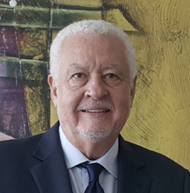 William Reuben-Soto born in San Jose, Costa Rica on May 17, 1947. He graduated as an Anthropologist at the University of Costa Rica, and got a diploma in National and International Relations, and a Master degree and Drs. in Social and Economic Development at the Institute of Social Studies in The Hague, The Netherlands (Erasmus Universiteit). Mr. Reuben-Soto taught at the University of Costa Rica from 1974 to 1999, becoming Professor at the Faculty of Social Sciences in 1990. During his academic carrier, he became the Director of the School of Sociology and Anthropology, Coordinator of the Central American Masters Program in Sociology, and Deputy Secretary General of the Central American Confederation of Public Universities (CSUCA). Mr. Reuben-Soto also led national and international NGO initiatives as the founder president of the Centro de Capacitacion para el Desarrollo (CECADE), President of the Latin American Association of Development NGO (ALOP), and Executive President of the Latina American Development Fund (FOLADE).From March 1999 to May 2009, he became Senior Staff of the World Bank, in Washington D.C. as the Coordinator of the Banks’s Global Participation and Civic Engagement Team; Senior Social Scientist of the Latin America and Caribbean Region as project manager, and leading research and advisory work on social and sustainable development and governance issues. From June 2009 to July 2017, he continued supporting the World Bank and the Inter-American Development Bank as Senior Social Development Consultant. Since August 2017 Mr. Reuben-Soto was appointed Minister Counsellor and Consul General of Costa Rica to the United Arab Emirates. Mr. Reuben-Soto speaks English, Italian and Portuguese, being Spanish his mother tongue. He enjoys writing fiction and essays. He has several publications, including a theater play, poetry and more recently, a novel.